Jered Chinnock’s mantra was “lift the leg, kick the foot out.” The paired actions were all part of a tough, years-long rehabilitation routine the Wisconsin man took on after a snowmobile accident left his lower limbs paralyzed when he was 26 years old. Coupled with the arduous rehab, Chinnock had a device implanted in his lower spine, relaying electrical signals from brain to muscles under battery power. The study team working with him hoped that one day the repetitive, targeted motions together with signals from the device would eventually make him able to walk again.

That day has come. The years of lifting the leg and kicking out the foot have paid off. Researchers reported September 24 in Nature Medicine that Chinnock, now 29 years old, is the first person with complete lower limb paralysis to take steps independently.

“This is very exciting research,” says Ann Parr, an assistant professor of neurosurgery at the University of Minnesota, who was not involved in the study. “There have been no real treatment options, and this has been very frustrating for patients, their families and the neurosurgical community.”

Indeed, just after the 2013 accident left Chinnock paralyzed, he completed the surgeries and rehabilitation that make up the routine care protocol for someone with his injuries: an operation to fuse some vertebrae below the injury site, upper body strengthening, and instruction in completing daily activities while in a wheelchair.

Then Chinnock joined a Mayo Clinic study to see if an electrical stimulator device implanted in his lower spine, coupled with rehabilitation, might achieve something bigger. A few weeks after the implantation, Chinnock could produce step-like motions while lying on his side. Then, he could stand on his own. And then, he could make step-like motions while standing, with a little support from a trainer.

Achieving the next goal took a little longer. After more than 100 sessions in the clinic and 43 weeks of repetitive exercises targeting different movements and muscle groups, Chinnock fulfilled his something bigger by walking slightly more than the length of a football field.

According to the researchers, the distance he walked while independently moving his legs was 111 yards, in a single session, taking breaks as needed. Although he could independently move his legs, he still needed a walker and an assist from a trainer to maintain his balance. If the device is turned off, he cannot make these movements.

The researchers are quick to tap the brakes on any over enthusiasm. “The results are very exciting, but it’s still very early in the research stage,” says Kendall Lee, a neurosurgeon at the Mayo Clinic in Minnesota and senior co-author on the study, speaking at a news conference. Yet, he adds, “I think this is highly significant even though it is only one patient being able to regain intentional control.”

One catch is the fact that no one seems to quite know why the process to restore the patient’s mobility was successful. The implant consists of an electrode implanted in the spine, connected to a computer-controlled device in the abdomen that electrically signals to the spinal cord. But researchers don’t know how the nerves are “sort of woken up again by the electrical stimulation to allow it to once again take information from the brain and use that to move the leg,” Lee says.

Lee and his colleagues used Chinnock’s rehabilitation sessions to guide the choice of device signals until they identified the just-right stimuli for each limb and movement. That approach is “what really grabbed my attention,” says James Grau, professor of neuroscience at Texas A&M University, who was not involved in the study. “This is a very important advance that has tremendous clinical potential.” Previous work with this device suffered because these parameters for stimulating a specific movement had not been teased out, says Grau.

Intensive physical therapy combined with electrical stimulation shows promise in other patients as well. A study published on September 24 in the New England Journal of Medicine found that two of four patients with similar spinal cord injuries, treated at the Kentucky Spinal Cord Injury Research Center, could take steps with the assistance of walkers after undergoing similar treatment regimens to the Mayo Clinic patient.

New Mexico Orthopaedics offers a full spectrum of services related to orthopaedic care and our expertise ranges from acute conditions such as sports injuries and fractures to prolonged, chronic care diagnoses, including total joint replacement and spinal disorders.

Because our team of highly-trained physicians specialize in various aspects of the musculoskeletal system, our practice has the capacity to treat any orthopaedic condition, and offer related support services, such as physical therapy, WorkLink and much more.

What Is Physical Therapy? How to Feel and Function Better 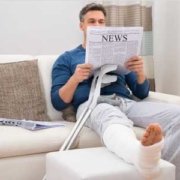 How Do Broken Bones Heal?

What is joint replacement surgery?